Venn diagrams have had quite a surge of publicity recently, trying to simplify representations of the different supra-national European organisations. I like this one, because it shows how the UK is now currently occupying an equivalent topological position to Bulgaria, Croatia and Romania. But following the Brexit opinion poll and the apparent willingness of the Tories to split the UK to ensure their rule over a Lesser England, it has four options… none of them appealing or easy. And three out of four of them are apparently implausible given either the UK’s atrophied economic/diplomatic corps or continued ascendancy of its tribal English ethnonationalism. 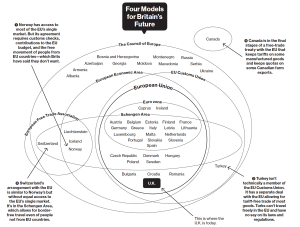